A number of changes are coming in the Fall of 2012

Deployment of OneBusAway RESTful API for "Discovery" of static information

MTA Bus Time is powered (in part) by the open source OneBusAway (OBA) software.  While MTA Bus Time's SIRI API is a new addition to the OBA project, OBA does have its own RESTful developer API.  We will be providing access to that that API, with some minor modifications, for the MTA Bus Time project.

The documentation for the OBA RESTful API is available online.  The modifications to this API with respect to MTA Bus Time are described here.  This API will allow you to "discover" static/baseline information about the bus services covered under MTA Bus Time.  It is, effectively, a set of web services that gives you convenient HTTP-based access to selected subsets of information otherwise available from the GTFS files.

MTA has two bus operating agencies: MTA New York City Transit and MTA Bus Company (with GTFS agency_id's "MTA NYCT" and "MTABC", respectively).  These two agencies share the same bus stops and set of bus stop ID's.  While their co-existence will be invisible to users of MTA Bus Time's web, mobile, and SMS interfaces, some slight changes are required to the developer API's to handle this situation:

2 new parameters that allow you to modulate the amount of information you get back from the StopMonitoring call:

In StopMonitoring, OnwardCalls currently start after the stop that is being monitored.  With this new release, they start with the immediate next stop the bus will make.

Transparency of Block vs. Trip-Level Assignment

MTA Bus Time tries to assign buses to blocks- a sequence of trips that start and end at a depot.  This allows the system to make a statement about what a bus will do after it reaches the end of its current trip.

However, there is not always enough affirmative and corresponding evidence to make such a strong statement.  In this case, MTA Bus Time falls back to a trip-level assignment, where it just picks a trip from the schedule that is representative of the route and stopping pattern that the bus is likely to pursue.

The SIRI API now reflects this distinction as described here and in other items below.  If the assignment is block-level, the new BlockRef field of the MonitoredVehicleJourney is present, and populated with the assigned block id.

When a bus has a block-level assignment and is in the layover at a terminal, a new OriginAimedDepartureTime field on MonitoredVehicleJourney indicates the scheduled departure time of that bus from that terminal in ISO8601 format. This is reflected in the Bus Time UIs as "At Terminal, Scheduled to depart at HH:MM."

StopMonitoring Updates to Use Block-Level Assignment

StopMonitoring results will now include buses that are scheduled to stop at the monitored stop according to the schedule for their assigned blocks, even if they are not yet on the trip that will serve the monitored stop.  This occurs only when those buses have a block-level assignment; otherwise, they are not included until they reach the terminal and present evidence that they will continue on to serve the monitored stop.  In general, this means that StopMonitoring requests will have more results. The diagram below shows an example of this behavior. 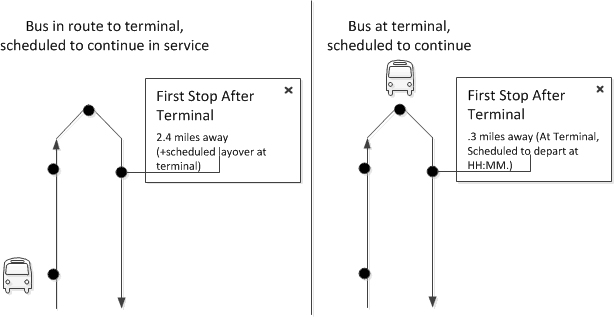 This is indicated by:

Changes from MTA Bus Time B63 Pilot to Production Launch

Summary of changes to the Bus Time API

JSON:
API calls will return JSON rather than XML if the suffix of the URL is .json rather than .xml.